There have been plenty of times I’ve wished someone was on this journey with me, more so someone to share experiences and explore the road with. Today I wish I had someone with me so they could smack some sense into me, and maybe try to rationalize the poor decisions I made regarding my route. I wish I had someone to grab me by the shoulder and say “Hey Matt, you think it’s a good idea to venture down this rocky road to nowhere? Do you have any idea where this will lead to and when you’ll get there? Have you considered the +25 mph headwinds coming from the northwest, implying they’d brush over your skin leaving you with a bone chilling and painful feeling of discomfort? How about those dark clouds heading your way?” Where was that voice today? It certainly wasn’t with me. I finally found my reach that exceeds my grasp, and I fell pretty hard.

I woke up pretty early thanks to the time change, 7:30AM seems early to me please don’t judge. I made my way to the living room of the hotel I was staying at and had some coffee with the owner. Her name’s April, and she’s running the place for her mother who’s currently recovering from an injury, I wasn’t told much more than that. We had a long conversation about her upbringing in Oklahoma, my background in New York (upstate… as I’ve had to explain to everyone). She told me living in a small town like Springfield causes you to know everyone’s business, “It’s hard to keep your distance from everyone” she said. People are constantly trying to figure you out, any personal issues become pubic knowledge if not kept quite. It reminded me of a saying an old teacher used to tell me, “Three people can keep a secret if two of them are dead.” We both laughed when I quoted him on that. I enjoyed hearing her perspective on living in rural Colorado, I’ve never come across a person from these parts let alone had a half hour conversation with one, leaving us well acquainted. I finished my second cup of coffee and cut off the conversation because I had to get going. It was 89 miles to La Junta, and I anticipated making good time after my last few days on the road.

La Junta is Spanish for “The Junction,” because it once served as an intersecting point between the Santa Fe Trail and a pioneer road that led to Pueblo, Colorado. Today it holds up the same reputation as well.  U.S. Highway 5o travels through La Junta, approaching from Pueblo to the northwest and continuing eastward towards Lamar and into Kansas. I’ll be taking this route into Pueblo tomorrow! U.S. Highway 350 begins at La Junta and travels southwest before reaching Trinidad, Colorado. State Highway 10 also begins at La Junta and travels west-southwest before reaching Walsenburg, Colorado. Even with all these intersecting highways, I was off the radar coming from Springfield. I set off from that small town with no idea what I would be encountering that day in southeast Colorado. As I rode, I saw some things every once in a while leaving Springfield. Maybe some abandoned houses, farming equipment, lots of cattle. Some “things” turned to some “thing” after a while. An old street sign, a barbed wire fence, maybe some foundational ruins here and there.

I began to worry, but the sign of manmade objects left me with a slight confidence to push on. I had no sense of strandedness yet. I battled onward through rocky roads and chilling headwinds, passed what seemed to be endless fields of parched shrubs randomly assorted like sprinkles on a birthday cake. That view, minus the occasional rolling hills and rocky peaks, did not change. I hope nobody has attempted to bike with 125 lbs of gear on a rocky dirt road with no end in sight. I had a ten inch wide track to follow the entire way, and if you couldn’t guess why it was a tire track. I could tell these roads weren’t used often based on appearance of the tracks. They weren’t freshly made, but nonetheless there for my use. Many times they would disappear leaving me fighting for balance as much as forward progress. I started to lose confidence about 30 miles in. How couldn’t I? I tried to fight the voice in my head but I also had a sense of reason. Everything was working against me, or so it seemed at the time. I’ve been in this position before, but I’m always on asphalt and I have cars or trucks occasionally passing by. Out here, not a sole. It was the first time I truly felt “alone.” Not just on my own but in a place where I wouldn’t be found for days if something bad happened. That was my mentality. Then I remembered it was Sunday, even better. In these parts, the Sabbath is taken seriously and I couldn’t count on anyone so much as lifting a finger. With all the cards stacked against me, I remained steadfast to the best of my ability. I will admit I let out some shrieks and cursed at the wind countless times. Nobody was around to hear the crazy biker and his lack of self-containment. I needed some sort of rebuttal to the wind, and screaming at it was sadly my only option. The pain I felt was as inexplicable as my surroundings. My thighs were numb, not from the cold but the lactic acid that was building up for four hours by then. My hands and feet were starting to lose sensation, to the point that I actually went into one of my panniers to grab some really warm socks, to then be used as mittens over my hands. My wrists became locked in place. I tried to roll them out occasionally but it wasn’t doing much. I thought about how awful my basketball shot would’ve been at that moment, knowing how bad it is without impairment. Chuckles. I continued hopelessly attempting to zone into the ride, but I couldn’t focus on anything aside from finding my balance on the rocky road. If I so much as looked up from the road for two seconds I would face the possibility of wiping out due to the countless potholes and large rocks that spanned across the road. I finally hit the panic button on one of the many ascents I had made by that point. I got off my bike and started walking, trying to think of what I was going to do. I had been watching GoogleMaps (the only functioning application on my phone by that point) go from “53 miles left” to “52 miles left” for what seemed an eternity. I wasn’t making it any closer and I knew I was in a tight situation. What now? Camping wasn’t an option, not out here. The plains are a dangerous place to set up camp especially in March when Colorado receives it’s harshest weather. The last thing I wanted was rain. I kept biting my lip when I was about to throw out the classic “Hey, it could always be worse” punchline. I was pushing “worse” to the limit and rain would take me beyond there. It wasn’t necessarily that the air was cold, it was mid 50s, but like I said that northwest wind made it feel like low 30s if I’m being generous. Time was going by, I wasn’t making much progress. I went through a series of mounting and unmounting my bike. It felt amazing to walk but I was only going 2 mph and it was almost as useless as standing with +50 miles to go. There were no other options. I passed through countless cattle fields, at times passing cattle on the road. I was worried one of them was about to attack me, feeling threatened by my presence. Some would charge at me from a distance, then fleeing away shortly after. Phew. 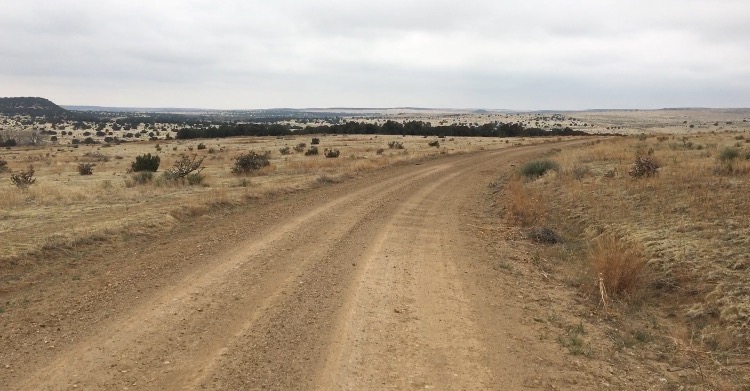 2 thoughts on “No More Dirt Roads”