Conditions: Overcast, headwinds from the northwest around 15 to 20mph and a chilly 45 degrees.

For 55 miles on the road, it wasn’t a bike through the park. Not by any means. Today I earned all 55 miles on the road the hard way, and yet I’ve grown a tolerance for days like these. I can’t expect every day to be a cake walk. If I didn’t have hard days, I wouldn’t have easy days. Besides, mom decided to surprise me in Colorado Springs so that was a great way to finish the ride!

I woke up around 7AM, packed up my gear, and planned to leave Mike’s house around 7:45. I had everything loaded up and I was saying goodbye to Mike when I turned back to my bike to roll it down his walkway, only to notice the back tire was flat. Great. Mike saw it was flat just as I noticed, and we both sighed realizing I’d now have to disassemble the rig once again to replace the tire. I took the wheel off, removed the tube and started searching the inner layer of the tire for the culprit. I wasn’t having too much luck so I handed the tire to Mike, who then started to slowly move this thumbs around the wheel in search of the object that had pierced the tire. I started taking out my repair kit, grabbing the replacement tube. “Aha!” He shouted. He found the object that pierced the tube. He handed it to me and I examined the area he was pointing to. I could barley see anything, it was a microscopic piece of metal wire, likely from a truck tire. When I ran my fingers across it, I suddenly realized there was no doubt this little piece of metal was responsible. Now I had to pull it out of there. It proved to be a challenge, but I finally broke out the tweezers and worked at it enough finally getting it to give.

I reassembled my bike once more, said goodbye to Mike once more, and set off towards Colorado Springs. It was chilly this morning, really chilly. I made my way from the south part of town up north. I stopped at The Hanging Tree Cafe on the way out of town to grab a bagel and coffee. I also needed to warm up already and put on some heavier layers for todays ride. After my 20 minute breakfast stop I was back on the road. It really wasn’t a nice day to see much of the mountains, or much or anything for that matter. The overcast painted the sky in several shades of gray and white, and the Rockies were definitely visible at the base, but vanished anywhere beyond that point. I kept thinking to myself I only had 45 miles to go, by that point I hadn’t known my mom was meeting me at a hotel on the northern side of Colorado Springs, adding on another 10 miles.

Most of the ride was too bland to talk details. I enjoyed the views and occasionally stopped for some pictures, but I don’t know what else to say. It was pretty desolate leaving Pueblo for about 25 miles until I started hitting the suburbs south of Colorado Springs. I passed through some small towns and developments along the way, but I didn’t stop. Today was a day to be done with, it wasn’t a leisurely ride by any means. I was racing the bad weather that was expected in the late afternoon and I needed to make it there before the rain picked up. Luckily I did. I arrived around a quarter after 2 walking into the Marriot Hotel soaked in sweat with the bike by my side. I was greeted by two employees who struck up a conversation with me as soon as I arrived. I entertained them with a few of my stories and got into some FAQs, mentioning after that I was waiting for my mom to arrive for check in. As soon as I said that, she walked in the entrance. Perfect timing. She had flown into Denver and was originally meeting me there, but she decided to make the hour drive south to Colorado Springs. Lucky me! Now I had a hotel, food, and of course my mom. I cleaned up and let mom put her feet up for an hour or so before we did anything. After that we made out way to Manitou Springs, a place recommended to us by the concierge. It was a 15 minute drive west of Colorado Springs, mom drove while I looked up some cool places to explore. The first place that struck my attention was called Cave of the Winds. On my map it showed a winding road leading up a mountain, with a large building at the peak. Interesting. We drove up this winding road until we reached the summit, to then find a large building constructed on the mountain side. We made our way towards the building, walking onto the observation deck overlooking the canyons below.

We made our way inside to see the gift shop and other attractions. The building serves as the main entrance into the Cave of the Winds for tourists. By the time we arrived, the tours were finished for the day unfortunately, and most people were clearing out by that time. I saw a group of employees standing near the cave entrance and approached them. I had no intentions of asking for a private tour, I simply wanted to hear the history and general information regarding the caves. One of them went on to tell me:

In 1869, a Colorado settler named Arthur B. Love noticed a thin cleft in the western wall of Williams Canyon. Upon further inspection, he discovered a dramatic limestone archway and cave entrance to what we know as Cave of the Winds Mountain Park. Fast forward to 1881, two brothers went exploring for new caves in the Williams Canyon area. As they were searching, the brothers found a small shelter cave near the same limestone archway that Love had discovered. As they approached the mouth of the limestone entrance, legend has it that their candles flickered mysteriously in the wind blowing from a nearby crevice. This signaled them to explore further, and when they crawled through the limestone archway, they discovered a large chamber unlike anything ever seen before. This discovery promised the brothers an amazing and dramatic new underground world to explore, unlike anything ever experienced! History books might show Cave of the Winds as being discovered 147 years ago, but the caves are millions of years old. As early legends of over a thousand years ago tell, the Jicarilla Apaches told of a cave near Manitou Springs where the Great Spirit of the Wind resided. They believed this due to sounds they heard in the caves from wind blowing though small passages, emitting a whining sound. Legend has it they even used the caves as a place of refuge during times of war.

I really enjoyed learning about the caves. They started asking me about where I was from and as you’d probably guess I got into a conversation about my trip. I started talking to one of the tour guides, named Kris, and he told me a little more about the caves and their historical significance. I looked over towards the entrance, looked back at him, and asked if I could walk out there just to take some pictures of the cave entrance. I wasn’t expecting what happened next by any means. He gladly unlocked the door and took me to the entrance so I could take a picture. “You know what, I’ll take you through” he said. I look over at him with a blank expression on my face. Mom and I were ready to head out, and suddenly we were getting a private tour through the half mile long cave system. It couldn’t have worked out better. Kris was around my age, from Boston and exploring the scenes out here in Colorado. He told me he related to what I was doing and he was happy to show me the caves because he was passionate about it. It comes to show what striking up a conversation can do for you. You never know what may happen. I couldn’t believe how lucky we were. Right place, right time I suppose. 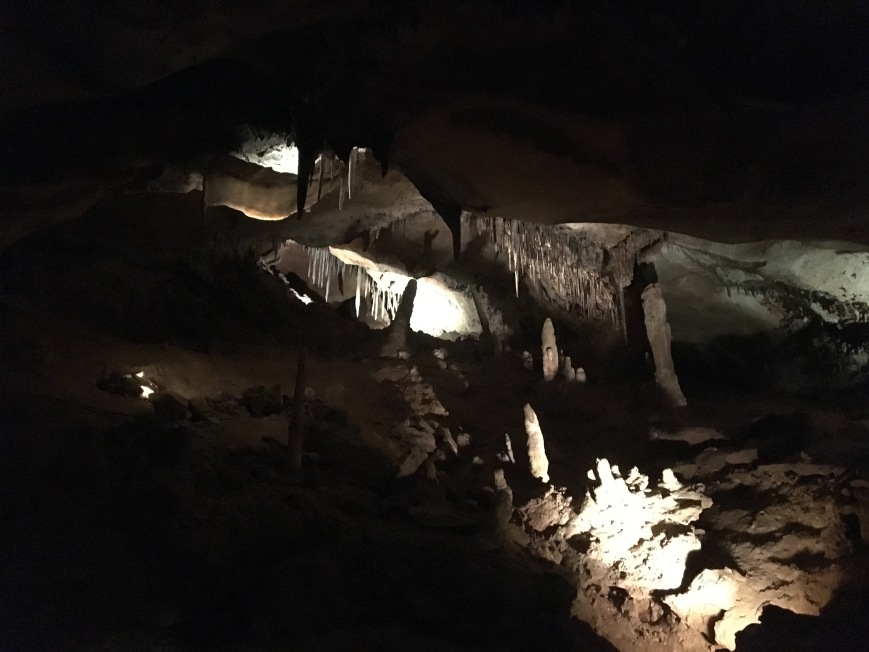 After our tour we ventured around town for a while before finding an Italian restaurant for dinner. I had chicken parmesan, she had eggplant parmesan. After dinner we were both spent from our long days of travel, so we made our way back to the hotel and went to bed around 11. Tomorrow I’ll be riding 80 miles to Denver, battling more headwinds and potential rain showers. I hope I live.