Today took me from the beaches of Mississippi, to the bayous of Louisiana, and all the way to the urban parts of the Business District in New Orleans. I have yet to experience any harsh weather, (according to dad there were bad storms north of me today, inland from where I was) and I hope saying that here doesn’t jinx my luck.

I decided to sleep in until about 9:30AM. I woke up and quickly gathered all my belongings, making my way to the Waffle House next door for some breakfast. Shortly after that I was on my way to NOLA, with much to see between Gulfport and there. As I made my way west, I started off on some scenic byways in Mississippi ultimately landing me on Route 90. 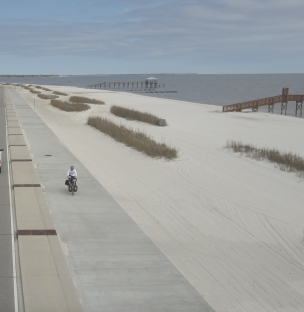 As I crossed into Louisiana, I suddenly could not get “Born On The Bayou” by CCR out of my head. I ended up listening to that song about half a dozen times until I was finally sick of it.

Many of the roads I took were absolutely beautiful; dangerous, but very scenic. I wouldn’t want anyone I care about taking some of those roads, in particular the ones lacking a shoulder, or composed of clay and dirt (which was even more difficult to ride on due to the rain the previous night). I heard stories of people getting hit by careless or distracted drivers, and I even saw a bike, painted in all white as a memorial to someone who had been hit and killed, along the highway at one point. That gave me some shivers, but like I said before, the risk is something I had to come to terms with when I set of on this journey. Anyway, back to the dirt roads; one thing you have to remember about riding a 100lbs bike and being a 200lbs person, you will not be able to ride on loose gravel, dirt, or sand. I’ve certainly had my close calls.

As I made my way closer to NOLA, I came across a really cool surprise, pertaining to something I spoke about in a pervious blog post. 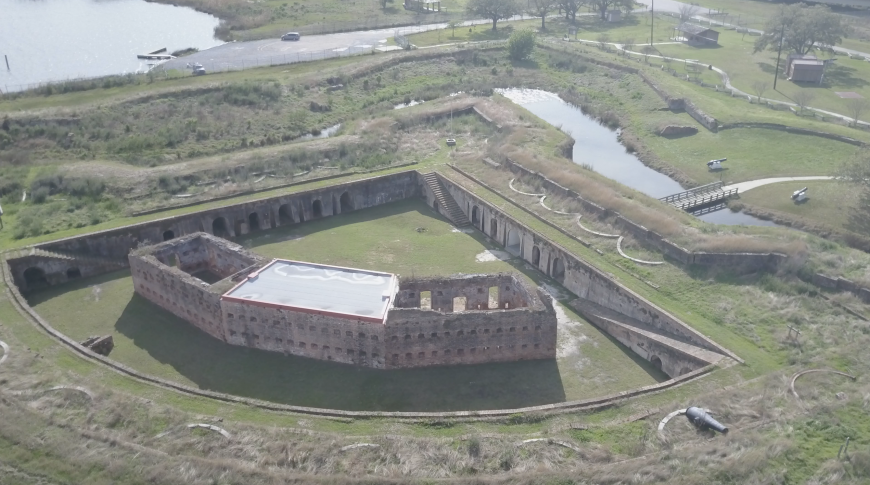 Remember Fort Morgan? A pre-Civil War fort that was used to defend again pirates and foreign countries. Well I’ll now introduce you to Fort Pike. If you’re not into the history, skip over the italics and finish the blog post!

Begun in 1819 and completed in 1826, Fort Pike was named for the explorer and soldier General Zebulon Montgomery Pike (1779-1813) whose name is also attached to Pike’s Peak in the Rocky Mountains. I’ll be passing Pike’s Peak when I head through Colorado Springs! Fort Pike is the first of the Third System fortifications, a group of brick and masonry structures built between 1816 and 1867. The fort was designed to withstand attack from land or sea.

Although the United States survived the War of 1812, the British destruction of our nation’s capital and their attack on New Orleans emphasized the weakness of our country’s defense. To prevent a foreign invasion from occurring again, President James Monroe ordered the placement of an extensive coastal defense system. These new fortifications, together with existing ones, stretched along the entire Atlantic and Gulf coasts and protected strategic ports and rivers such as New Orleans and the Mississippi. Forts Pike and Macomb (also called Fort Wood) were two of six new masonry forts built in coastal Louisiana at this time. Together with Forts Jackson and St. Philip on the Mississippi River and Fort Livingston on Barataria Bay, these fortifications protected New Orleans from a seaborne invasion.

The original armament of Fort Pike consisted of 32-pounder and 24-pounder cannons; the exact number of each type is unknown. At various times the fort held other types of cannons. The wartime garrison was approximately 400 men; in peacetime it varied between one and 80 soldiers.

Fort Pike’s role in the military affairs of the United States prior to the Civil War varied considerably. During the Seminole Wars in the 1830s, Fort Pike served as a staging area for many troops en route to Florida, and also as a collection point for hundreds of Seminole prisoners and their black slaves who were being transported to Oklahoma. Cannons were removed from some of the casemates to convert them to cells. At one point in this conflict, only 66 soldiers guarded 253 Indian and black prisoners.

Similarly, during the Mexican War in the 1840s, Fort Pike was a stopover for soldiers bound for Texas and Mexico. In between these wars, Fort Pike was largely abandoned and left in the care of a single ordnance sergeant.

In 1861, the silence of Fort Pike was broken. Before the actual start of the Civil War, the Louisiana militia captured the fort. Confederates held it until the Union forces took New Orleans in 1862, whereupon the Confederates evacuated Fort Pike. Union forces then reoccupied the fort, using it as a base for raids along the Gulf coast and Lake Pontchartrain area and as a protective outpost for New Orleans. The Union also used Fort Pike as a training center, where former slaves were taught to use heavy artillery. These troops became part of the United States Colored Troops, who played an important role in the outcome of many battles, including the siege at Port Hudson. Yet, in spite of all this activity, not a single cannonball was ever fired in battle from Fort Pike.

Fort Pike was again left to the care of an ordnance sergeant from 1871 until it was officially abandoned in 1890. In 1972 it was placed on the National Register of Historic Places, an honorary designation for significant historic sites.

I had some opportunities to fly the Mavic today (as you saw from the Fort Pike and beach shots above) which was really rewarding but frightening at the same time. I nearly flew it into telephone wires today, which would’ve been a huge damper on the trip, especially because I’m mostly looking forward to using it out west. This is a screen shot from a video I took of some wetlands near Fort Pike, and the small community located nearby. Stay tuned for that video posting on my Instagram (@Ride4Parkinsons).

I’d now like to turn to a more serious discussion about what I’ve learned biking through many communities around the southern coast. Being from Upstate NY, I consider myself very fortunate, when referring to natural disaster threats. The worst thing I’ve really had to worry about was an ice storm taking out the power for a fews weeks (although I heard 70 mph winds just hit Upstate NY today knocking over trees and taking out power in various areas… that’s a little ironic that I’m in New Orleans and it’s as calm as can be). This epiphany really hit home on my tour of the Jefferson Davis estate yesterday. That house was destroyed by Hurricane Katrina, and it took four years to rebuild it entirely. People down here are used to rebuilding, reconstructing, and restarting their lives after these natural disasters take their homes. I cannot imagine the frustration and helplessness they must feel from these incidents, and yet they continue again, and again to move forward, starting once more from the ground (or at times maybe just the roof) up. This applies to all areas within striking distance of natural disasters. Whether it be earthquakes, forrest fires, and droughts out west, tornadoes in the great planes, or hurricanes around the gulf and throughout the east coast.  These people risk life and death to live in their homeland, and I truly respect that.

I mad it to NOLA, and the excitement of the city was long started and far from ending by the time I arrived. I’ve been to here twice for Mardi Gras, and while I loved the time I had during that time of year, I’m more excited to see the city in its true form.

I found Bourbon Street and immediately made my way down towards Canal Street. I like to believe the daylight keeps New Orleans “finest” out of the streets, as I soon realized when nighttime came around. I’ve seen this before, and it was only further proven this time. The streets were full of acrobatic performers, percussionist and brass musicians, along with countless promotors handing out pamphlets and “discounted deals” for gullible tourists to take. I attracted some attention, firstly because I was on a bike, and secondly because I had everything I owned attached onto my bike. At certain points it was frustrating getting through the crowds on may way to Canal Street but I finally made it. My next objective was to find a place to sleep for the night (I know, last minute, thats how I roll). Warm Showers, having 30+ people who were registered as hosts in the area, failed me once again and I resorted to my routine cheap hotel hunt. I made my way to six different hotels, battling for a cheap one night stay, refusing to accept the average nightly rate of $200. I finally found a hotel that had a manager willing to listen to my story, my situation, and my request for a reduced rate on a room. I was able to get the employee discount, which was surprising even to me, especially because this hotel was a five minute walk to the center of town. I threw all my stuff into the room, and rushed back down to Bourbon Street with my camera to capture some of the scenes. 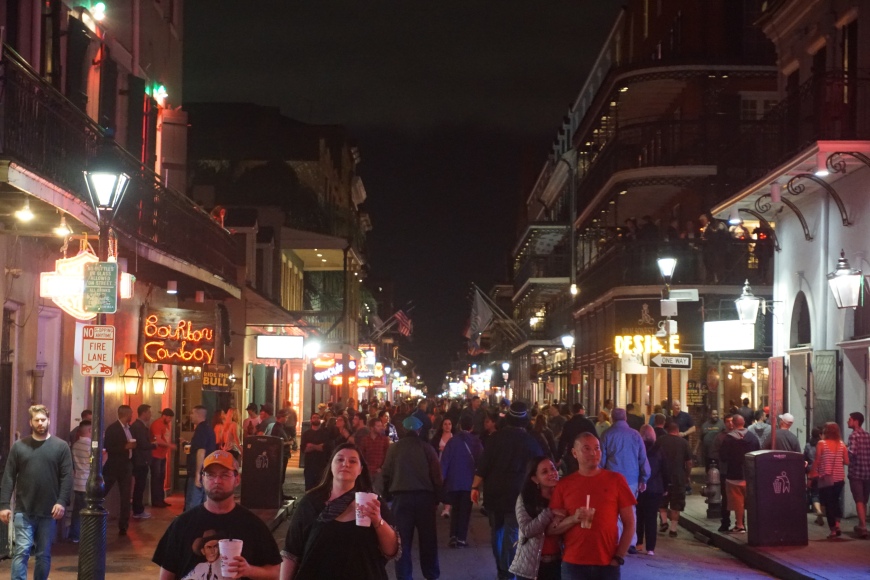 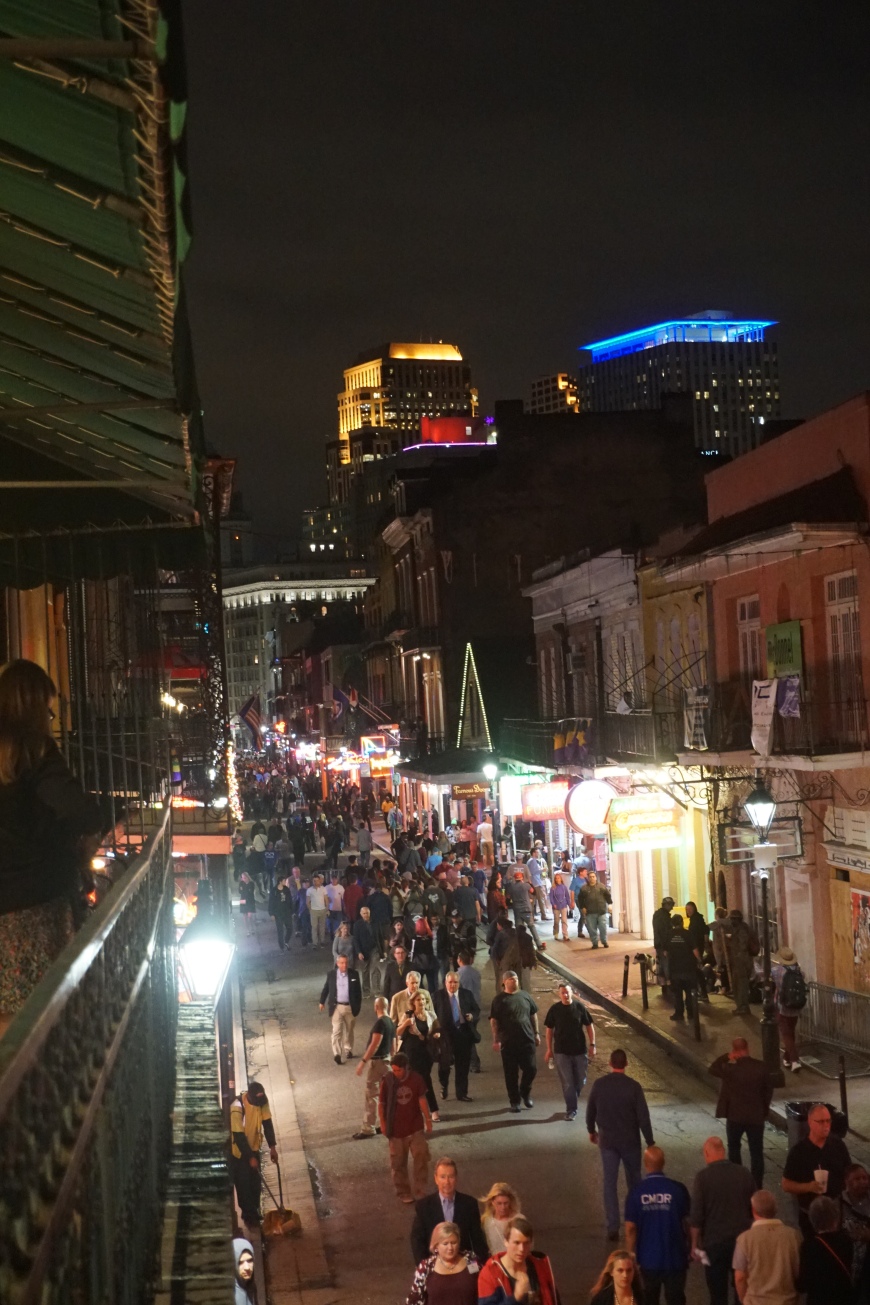 NOLA is an interesting place. It’s a place I’d recommend you visit if you haven’t, but one time may do the trick for you (I say the same thing about Las Vegas). If you haven’t noticed, I’ve been referring to NOLA as “The Big Easy.” It’s earned that name because it’s known for its round-the-clock nightlife, vibrant live music scene and a variety of cuisine reflecting its history as a melting pot of French and African and American cultures. Tomorrow I’ll be spending the day in NOLA as my second resting location along the trip. I will reach back out with what I’m sure will be an adventuresome Thursday, this coming Friday after my trek to Baton Rouge.